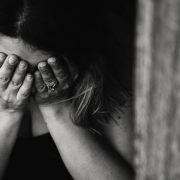 Elise was a young Bega Valley woman expecting her first child. A few months into the pregnancy her partner’s behaviour began to become violent. At first she thought the abusive behaviour of her partner would end, but the abuse continued.

She was torn between staying in the hope that things would change and having nowhere to go. She was also thinking of the future of her unborn child.

“I didn’t want to be alone, I wanted my child to have a happy family with both parents,” Elise said.

“The prospect of leaving was the hardest part. I didn’t want to come to terms with it. But the violence was escalating and I was receiving serious threats. I felt embarrassed and ashamed. It’s a small community and I didn’t want people to know.”

“Most of the statistics we have are police statistics and they are just the reported cases,” Domestic Violence NSW CEO Moo Baulch said.

“Hospitalisation is normally when police get involved and the situation can be way down the track as far as abuse is involved. A lot of abuse is hidden.

“It is common to try to resolve domestic violence issues behind closed doors. This is the way we have spoken about domestic violence; it was always private, hidden family business. There can be some real barriers to seeking support for family violence.”

Feeling ashamed, breaking up families and isolation are just a few of the barriers women face. In rural and regional areas like Bega those hurdles can be doubly challenging.

“Woman are faced with a lack of public transport. If they don’t have a car or a licence or live remotely, how can they flee?” Ms Long said.

“There can be situations of reactive fleeing and women don’t have a licence but they need to leave. They could be stuck out on rural properties where there is access to guns. But because of circumstances it’s easier to stay.”

The Staying Home Leaving Violence program aims to prevent women and their children becoming homeless or having to move away from their support system.

Elise said if she didn’t find the support of SEWACS  she would have most likely returned to the abusive situation.

“I couldn’t return home, but I was living out of my car. It wasn’t easy. I don’t know about other people’s cases but I imagine many women return or stay because they don’t know about the resources or are ashamed to get help.”

“I was basically homeless and pregnant – what I don’t understand is why I had to leave my family home because of his actions,” she said.

This service from No to Violence offers assistance, information and counselling to help men who use family violence.